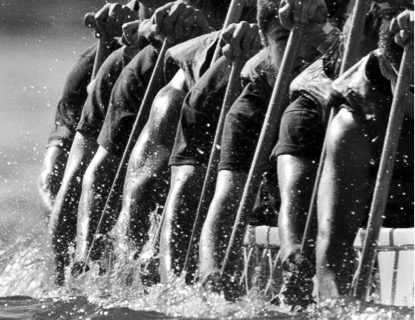 Everyone suddenly burst out singing;
And I was filled with such delight
As prisoned birds must find in freedom,
Winging wildly across the white
Orchards and dark-green fields; on – on – and out of sight.Everyone’s voice was suddenly lifted;
And beauty came like the setting sun:
My heart was shaken with tears; and horror
Drifted away … O, but Everyone
Was a bird; and the song was wordless; the singing will never be done.

It was cold and the rain continued to fall steadily out of a bruised grey sky as it had done for hours.  The river glided by looking sullen.  Round the bend upstream I was waiting for a team who were many hours into a leadership project designed to challenge and develop their leadership behaviours.  The weather I considered to be in my favour; as I wanted to strip away the team’s veneer of cosy congeniality and look at how they coped under pressure – a part of which involved being fatigued, cold and wet.  They had just conducted a cliff top evacuation of a casualty and were now endeavouring to get the casualty downstream to medical attention.  I was expecting their morale to be hovering around zero.  As they came into view around the bend the sound of singing voices drifted over the water, an envoy to their swift arrival.  Morale was high as they sprang from the boats and quickly set about pulling the boats from the water and moving on with the task.

Morale is such a fragile thing – a collective sentiment in the group spun of gossamer threads, stronger than steel but delicate and ephemeral.  This little snap shot of a team in action was also a reminder of the power of music & a leader who kept the team performing in the face of adversity because she had remembered an old French kayaking song her father had taught her to keep the paddles in rhythm.

Inspiration is a much hyped but usually sterile discussion within leadership.  It refers to the ability to generate the sort of emotional response that lifts performance.  In all my years of leading and observing teams I’ve very rarely seen teams ‘inspired’ by leadership – but I have seen them moved by the power of music to create an emotional response.

In WWII in the Western Desert the SAS adopted Marlene Dietrich’s Lilie Marlene as an unofficial anthem.  Siegfried Sassoon’s poignant poem at the start of this post summons up the same image of music’s power. The Regiment still retains its affection for the melancholy tune.  Anyone who’s ever stood in close proximity to a corps of military drums wont doubt their ability to quicken the blood and the idea of rushing through fire toward an enemy suddenly seems less implausible.

Advertisers, marketing professionals and the film industry have long understood the power of music to generate mood and transmit emotion.  This is also the reason why elite athletes and their performance psychologists use music to help anchor focus and a performance mindset.  The right music becomes an important part of the anticipation and preparation for performance.  Interestingly research is still not clear on the mechanism for our emotional response, though I once worked with a University Lecturer whose personal theory was that music at some level predates language and that it retains an ancient connection to something deep in our unconscious minds.

I’m not sure what lesson distills out of these brief observations but I think it connects to the collective mindset of the team.  Too often we may see the morale of the group as a phenomena like the weather. It just turns up, sometimes it’s good and sometimes it’s bad.  Actually morale and mindset are both a leader and a team member’s responsibility.  A responsibility first on every team member to manage their own mindset, to build and sustain the positive and minimize and control the negative.  A responsibility second, to help nurture and support the mindset too of your teammates.  Thirdly and ultimately a leaders responsibility to set the emotional tone of the team, primarily through the power of their example. 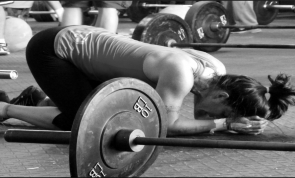 ‘Beliefs are a special category of information that fundamentally shape our expectations, behaviour & performance’. Have you ever been in a race and had a feeling of complete exhaustion and wondered how you were ever going to keep going when the finish seemed so far away? Only to find yourself…