The team is Stronger & Greater than me Alone 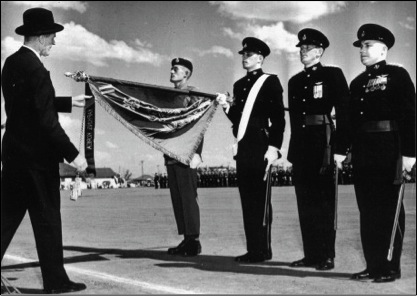 US Ambassador to Canada presenting the award to 2nd Battalion Princess Patricia’s Canadian Light Infanty for actions at Kapyong during the Korean War. A rare example of the Award being made to an Allied Unit.

In the Armed Forces of the United States there is an award known as the Presidential Unit Citation. It is a collective award given to a unit in the US military of Allied Forces that shows extraordinary heroism against an armed enemy.

‘The unit must display such gallantry, determination and esprit de corps in accomplishing its mission under extremely difficult and hazardous conditions so as to set it apart from and above the other units participating in the same campaign.’

Soldiers of a unit awarded a Presidential Unit Citation are distinguished by the right to wear the ribbon of the award above the right breast pocket of their dress uniforms.

The Unit Citation is highly unusual in recognizing collective endeavour. Virtually all honours and awards in the military recognize individual bravery, leadership or service. Napoleon once cynically quipped that ‘a solider will fight long and hard for a bit of ribbon’. There is some irony to this since fighting wars is the epitome of collective effort. Success is dependent not on the actions of one but on the actions of many, working together. Business is little different to this, yet as a society we habitually tell our stories through the emblematic actions of heroes. Our popular culture continually reinforces the image of the brilliant unconquerable individual standing undaunted against the odds and saving the day. From Hercules to Superman via the Lone Ranger the story changes little.

In the workplace the success depends on teamwork. Appraisals, incentives and awards are almost universally geared to assessing individual performance. This may make perfect sense from the perspective of the HR department but it ought to be worrisome to the board or senior leaders taking a view on what generates and sustains collective success.

A focus on ‘I’ at the expense of ‘we’, too often allowing us to forget “we all drink from wells we did not dig & sit in the shade of trees we did not plant”.  – Adapted from Deuteronomy 6 10:12

The glory of the Presidential Unit Citation is that is recognizes teamwork, collective endeavour and commitment in the face of enormous adversity. Maybe that is something we should all think more about?