When Did You Last Check Your Team’s Feet? 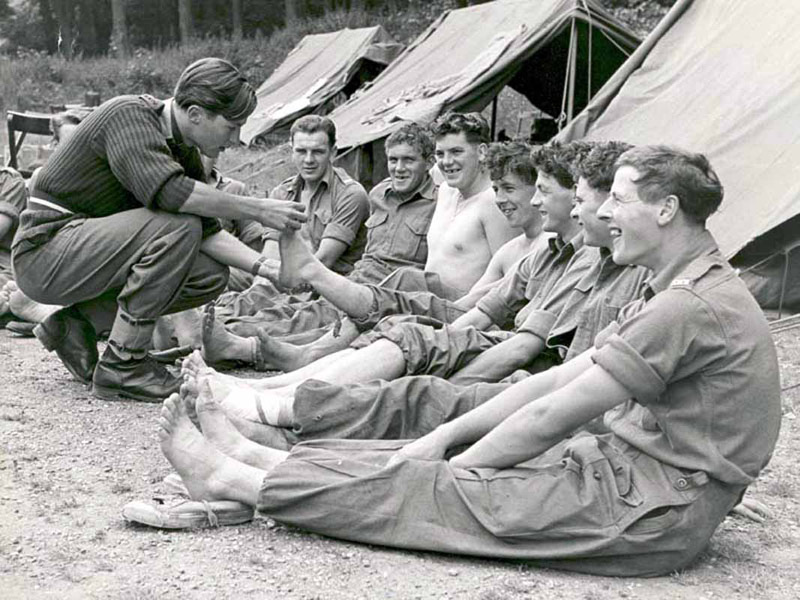 It rained every day – except the days when the rain turned to sleet.   Winter in North-West Europe, the temperature always close to zero, a wet penetrating cold seeping into your core and pushing out the warmth. Our Infantry Platoon, made up of 30 soldiers, had been in the field for over a week, marching long distances every day with crippling packs, weighed down with rations and ammunition. Every night in pairs we dug shell scrapes and settled in for the long dark night; always cold, our fitful sleep broken every few hours for the necessity to crawl out of the warmth of a sleeping bag and move to a sentry position, alert for our enemy’s attempts to identify our positions.

In the morning before we marched on again I went around the position quietly talking to each man and checking everyone’s feet. Feet that are always wet and cold quickly develop non-freezing cold injuries (trench foot), untreated the symptoms can quickly cause painful swelling and render an infantry man next to useless, unable to march and combat ineffective. Officers check their men’s feet to ensure the discipline of looking after your feet is maintained; putting on dry socks when possible, using foot powder and maintaining good circulation by not over tightening laces.

I readily understood the practical necessity of this drill but it was only as I developed as a leader that I came to appreciate the equally important symbolic reasons for officers checking their soldier’s feet.

The heart of leading a team is making sure that everyone else is all right; in thinking about others you come last. An Infantry Platoon like any good team works best when there are strong bonds of trust in place between every team member and especially between the team and the leader. Infantry Platoons use a ‘buddy buddy’ system; your always part of a pair, you share your shell scrape together, cook together do sentry duty together. The system means there is always someone looking out for you, your primary duty is to look after your buddy and his to look after

you. Someone is always covering your back. The Platoon commander’s role is to look after everyone. Simon Sinek in his book ‘Leaders Eat Last’ http://goo.gl/7OcTz8 describes this as a ‘circle of safety’. Inside of the team circle we are safe so that we can focus outside on what we need to do to achieve the mission. In business this is no different to the military – strong teams are psychologically and emotionally safe places because of the bonds of trust we have for each other.

In the ancient warrior culture of Sparta in the 6th Century AD a warriors shield was the most important piece of his equipment. It was the thing that helped keep everyone else safe. The overlapping shield wall provided for the security of everyone. Dropping a shield, even in training, was a matter of extreme disgrace. ‘With this or on this’ was the traditional farewell of Spartan mothers to their sons, exhorting them to bring back their shields or die trying. As a warrior society the Spartans were dedicated to military efficiency in every respect and when they considered fear – the handmaid to every solider – they reflected that the opposite of fear was not courage but love. In the 21st Century it is our attitude to our team-mates that creates a shield wall behind which we can be safe. Sure enough when we look out for them others will look out for us.

Teams don’t follow leaders because they have to; coercion is never a recipe for effective leadership. The myth that leadership in the Army is easy, everyone has to do what the Officer or NCO says, could scarcely be further from the truth. Legal compliance and whole-hearted buy-in are worlds apart. For a team member it is a choice to follow a leader, born out of enlightened self -interest. This leader has the expertise to make the right decisions and will keep me safe. I can trust them, sometimes literally with my life; with my hopes, ambitions and even my weaknesses and fears.

The emblematic act of checking my soldiers feet was about service, an act demonstrating humility to this little gang of tired wet soldiers, whose needs I and my brother officers slowly learnt to put before our own cares or comfort. Making the brews, taking out the trash, giving your time & undivided attention, these are the practical ways in which we can set an example and give service that builds real trust. C S Lewis said that humility was not thinking less of yourself but thinking of yourself less often. In putting the team first I earned their trust, only once that had been achieved and the team had decided I was the leader did the rank on my shoulders mean anything at all.