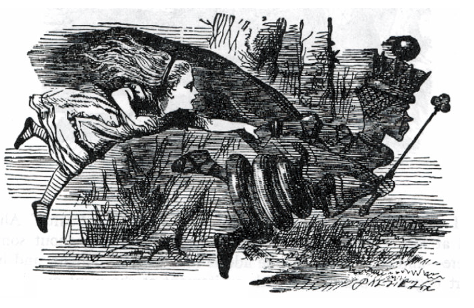 In a typically surreal moment in the story of ‘Alice Through The Looking Glass’, Alice finds herself with the Red Queen running as fast as she can simply to remain in the same spot. The Red Queen tells Alice, ‘Now, here, you see, it takes all the running you can do, to keep in the same place. If you want to get somewhere else, you must run at least twice as fast as that!’

It’s an apt metaphor for the challenge of trying to get better and develop skills, particularly for the key behaviours that drive leadership and team performance. Most leaders and most teams are good enough but probably well short of their real potential. Most people in this situation would refute that they are as good as they are ever going to be, but most too would offer little explanation as to how they expected or intend to get better, other than with experience. Hoping that mere repetition will add skill – Alice and the red Queen running to keep still.

To accelerate or change the nature of experience we need practice, the repetition of a skill or part of a skill done in such a way as to allow learning and improvement. Good practice involves many things but in this short article here are four factors to think about in the design of effective practice.

Edwin Moses is the finest 400m hurdler the world has ever seen. For a period of 10-years he never lost a race! Part of Moses’s secret was his stride pattern, he had worked out that he could take only 13 strides between hurdles when everyone else took 14. He worked this out because he was ruthless at unpicking and questioning the assumptions of his sport. Dick Fosbury did the same thing with his unconventional approach to the high jump that ultimately revolutionized the sport. Michael Lewis’s book Moneyball tells the story of Billy Bean and the Oakland A’s baseball team and how statistics were used to unpick virtually every assumption in the game about talent. Most disruptions in business occur, because somebody checked the industry and the markets assumptions and saw they didn’t add up. Netflix was a bet that streaming over the internet would kill physical DVDs and Air B&B thought that spare rooms in private homes could compete with hotels. What are you assuming about customers, employees, technology, cause and effect, inputs and outputs, cost benefits, correlation, causation and the 80:20 splits for effort and reward in your own ecosystem? All these facets of performance and many more are subject to assumption; the question is really how long ago and how hard did you kick the tyres?

Have you ever noticed what uncanny mimics small kids are? They are trying out all sorts of patterns of movement, behaviour and speech based on what they see modelled around them. Before we practice, we need a picture in the minds eye. The problem with these mental images is that they are often quite weak or poorly built around partial understanding of what you are observing. This can be particularly true of complex social behaviours such as leadership or teaching. Building good templates often requires working with other experts to develop your own mental imagery of what good looks like – for example this might involve video analysis or working with a coach or mentor. Ultimately good templates help you develop an explicit, rather than a tacit understanding of what you are doing and trying to do. If you’re a leader and setting direction, are others really clear what good looks like? Have you done enough to model and help build good templates for effective practice?

Intention stems from attention. To get better, to practice effectively, first you have to be paying attention. To make that attention count you need focus and to achieve that you need to be clear about the intention of your practice.  Most skills are actually a combination of interlinked sub-skills, which in combination add up to your ability to perform. A soldier needs to be fit, to have good fieldcraft skills, to be able to navigate, shoot and communicate. Only in combination do the parts add up to the ability to operate effectively. Good practice in part relies on our ability firstly to break down and isolate these subskills and then to pay selective, focused attention. What is the point of this practice, what are you aiming to improve? Business generally moves from planning to execution; ‘we don’t have time for training, like soldiers or sports teams’. Which is true but simply means that execution is also practice and so the quality of your focus and intention is even more precious.

If you watch a Platoon of junior soldiers or officer Cadets being taught drill, marching up and down a parade square, it’s informative to observe, how little feedback there is versus how much correction. Feedback is basically cognitive, an idea, that you should do something different. Correction in contrast is practical, it involves redoing the action until it is correct and then repeating it correctly. Colour Sergeants occasionally provide feedback and demonstrations of correct movements in order to improve the basic mental model or template the cadet is working with but primarily what happens is correction, do it again; do it again. This is far more powerful as practice because of how the brain’s neurones learn to fire and connect together – ultimately forming a habituated pathway. Feedback is invaluable but it is not the whole picture, applied feedback is a correction and is ultimately the more powerful route to progress and mastery.

To avoid the Red Queen’s dilemma, let us make sure if we are going to run that we are going to get somewhere and ideally somewhere we want to go. Unlocking our ability to practice might just be a part of the answer.